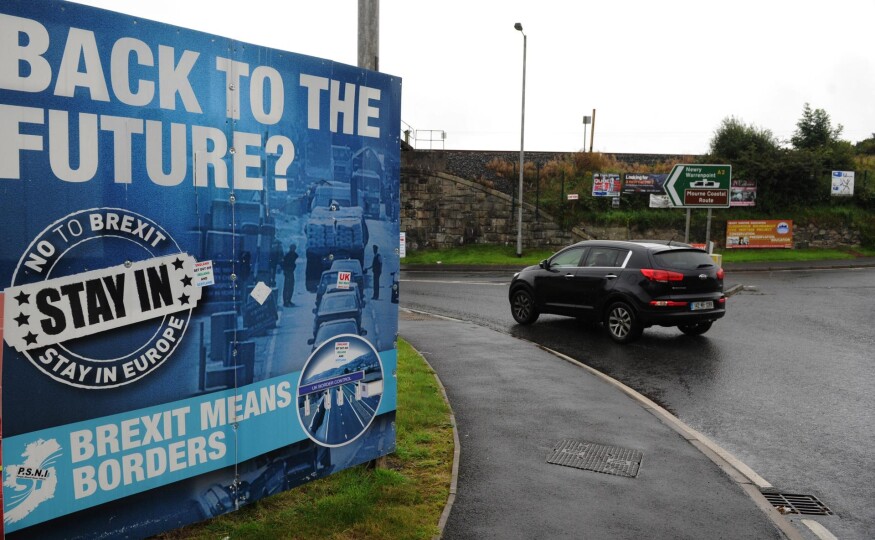 Financial Times / Jim Pickard
01.09.2017 14:12 UPPDATERAD 01.09.2017 17:20
Sue Shaw, a school worker, said she had expected Brexit by last Christmas. "A lot of people I work with thought we would be out within a week, they thought that it we voted leave we would get on and leave," she said as she walked her dog near the river Thames.
"It's been very slow. Personally, I thought we would be out in six months."
Dave Matthews, a retired accountant, echoed her view. "The government has been too slow and a bit too weak in the negotiations," he said as he filled in a crossword on a bench.
He partly blamed David Cameron, the former prime minister, for failing to oversee any detailed preparations for Brexit in the run-up to the June 2016 EU referendum.
Now he is becoming alarmed about the idea of a "transition deal" for several years after March 2019.
That would involve continued freedom of movement and payments to the EU as well as potential oversight by the European Courts of Justice - while a trade deal is finalised with Brussels.
"I think if we are going to do this thing, then the sooner we go the better. Hanging on for years and years, I don't see the benefit of that quite honestly," he said.

Many Leave voters wanted to quit the EU because they thought excessive immigration had driven down wages and put pressure on public services, said Mr Matthews. "Carrying on with that is not acceptable."
As David Davis, Brexit secretary, tries to pick his way through the complex negotiations, the patience of Leave voters appears to be wearing thin. Confusing messages emerging from the government have not helped.
Julie Oropallo, a retired hairdresser, admitted that the Brexit process had not been what many voters had expected when they voted Leave. "I voted to come out, but it seems to be taking a lot longer, I imagined it would be over in two years or so, but it's turned out to be incredibly complex."
Meeting the public's expectations could also pose problems for the government, with interviewees in Staines puzzled over several details, including why Britain should pay a multibillion pound "divorce" settlement. Several people agreed with Boris Johnson, the foreign secretary, who said the EU could "go whistle" if they expect a large payment.
"Boris was right, we shouldn't pay a penny," said Margaret Blythe, a retail worker. "Think how much we've given them over the years . . . they probably owe us don't they?"

Anthony Wells, politics director at YouGov, believes the final figure for the divorce bill could trigger a backlash from angry voters.
According to a survey by ICM for The Guardian newspaper this week, only 11 per cent found the idea of Britain paying "up to £30bn" "acceptable" against 72 per cent who did not.
Pople will think, 'crikey', that's a huge amount, that's outrageous, unless the popular media don't express any outrage . . . which feels unlikely," said Mr Wells.
"The thing is, issues such as trade deals, City passporting, customs and so on are incredibly complicated whereas the payment of £10bn, or whatever the final figure is, is incredibly straightforward."
Mr Wells said that the figure could potentially be sold to the public if it was described as a fee for continued access rather than a fee for simply leaving the bloc.
But that had not happened yet. "I don't think the government has even started to communicate a message on this. Instead, they are still letting it be talked about as an exit fee."
The government has found it hard to communicating a clear message over Brexit without a clear idea of what kind of deal it can strike with the EU. Asked who was responsible for selling Britain's Brexit strategy to the public, one aide replied: "The prime minister and cabinet."
Sir Craig Oliver, former head of communications for Mr Cameron, said that any public backlash against the final deal, over issues such as immigration or the divorce bill, would depend on the reaction from Eurosceptic Tory MPs and their media allies.
"It all depends on what the Brexiters are willing to tolerate. If they say: 'We're OK with that' then it's harder to build up a narrative of betrayal or disaster," he said. "If they say, 'hold on, this is not what we were sold', then it becomes more difficult for Number 10."
"The government's communication strategy seems to be based on a confidence that the Leave lobby won't complain," said Sir Craig. "If Brexiters don't provide a megaphone to amplify dissent, it's less likely there'll be a public outcry."

Chris Pratt, strategy director at Hill+Knowlton Strategies, said there was "no evidence" of a planned, deliberate communications strategy from ministers.
"The government only seem able to firefight," he said. "There is a real risk that they will fail to manage public expectations following the rhetoric of the referendum campaign and business is left with continued uncertainty."
Joey Jones, a former adviser to Mrs May, said voters seemed "pretty bored" by Brexit: but they could be "inflamed" at the drop of a hat.
"The key thing for the government to do is explain that any deal requires messy compromise and concessions on the UK side not just in Brussels," said Mr Jones, now head of public affairs at Weber Shandwick.
"If ministers don't get that across, then whatever eventual agreement is reached will be torn apart by true believers on one side or another denouncing it as a cave-in and capitulation."
Copyright The Financial Times Limited 2017