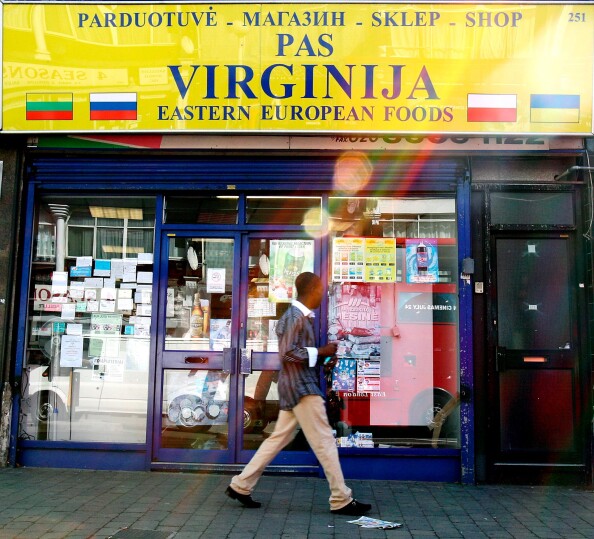 Financial Times / Helen Warrell
03.12.2016 09:47
Som prenumerant på HBL365 har du tillgång till exklusiva artiklar från Financial Times, direkt i din mobil.
This was driven by the unprecedented arrival of 284,000 EU citizens. For the first time, Romania became the most common country of previous residence, making up one in 10 of all long-term migrants to the UK.
Theresa May, prime minister, has pled­ged to exercise better control of immig­ration since the June 23 referendum but is still struggling to cut annual net migration to the “tens of thousands”. Amber Rudd, who replaced Mrs May as home secretary, has proposed further visa curbs on non-EU workers and students.
According to the ONS, the number coming to study in the UK had already fallen by 15 per cent to 163,000 in the year to June. This may reflect policies to rein in student visas brought in during Mrs May’s tenure at the Home Office.
Statisticians made clear the rise in EU arrivals was a significant factor in the continuing high levels of net migration.
– Immigration levels are now among the highest estimates recorded. The inflow of EU citizens is also at historically high levels and similar to the inflow of non-EU citizens, said Nicola White, ONS head of international migration statistics.
– There were also increases in the number of asylum seekers and refugees. She said work remained the most common reason for long-term immigration and said the striking increase in jobseekers coming from Europe.
In the year to June, 189,000 EU citizens arrived in search of work, and of these, 57 per cent had a definite job offer. However, the number of EU jobseekers has risen by more than a third since the previous year to 82,000 - a record high and a “statistically significant” increase, according to the ONS.
It is not yet clear how Mrs May will manage immigration from Europe after the UK leaves the EU. The growing number of EU jobseekers gives weight to one mooted proposal that entry would be granted only to those from mainland Europe in receipt of a firm offer of work.

Statisticians said the boom in immigrants seeking employment was partly because of a rise in numbers of people from the southern EU states including Spain and Italy, and suggested that this reflected “weaker labour market conditions” in some of those countries.
As the figures were published, the government was forced to defend reported comments from foreign secretary Boris Johnson to EU diplomats that he personally was in favour of free movement of people from the bloc. But responding to the data, Robert Goodwill, immigration minister, said the British people had sent a “clear message” that they wanted more control of immigration and that the government was “committed” to getting net migration down to the tens of thousands.
He said ministers would “continue to reform” non-EU immigration routes, but Diane Abbott, shadow home secretary, accu­sed Mrs May of rep­eating “mistakes” made in the Home Of­fice. “We should welcome overseas students and the contribution they make.”

For the seventh quarter in a row, net migration to the UK is three times higher than Downing Street’s target. But beneath the headline numbers are some early signs that peak migration might have been reached.
Seamus Nevin, head of employment and skills policy at the Institute of Directors, said we had seen a “high watermark” for immigration.
The rise in EU migrants to Britain in the year to June may have been a pre-referendum rush. According to official statistics, the number of people who arrived from the EU for work purposes but without a job offer was up by more than a third on the previous year. The ONS said this was a “statistically significant” increase.
Separate government figures released yesterday pointed to the fact that after the referendum, the number of EU workers arriving in the UK flatlined. National insurance number allocations to EU nationals stood at 150,500 from July to September 2016, a slight dip on the 152,000 that were allocated in the same quarter of 2015.
The strongest indication comes from employers. Gerwyn Davies, labour market adviser at the Chartered Institute of Personnel and Development, warned yesterday that even though the supply of EU nationals to the UK workforce grew stronger ahead of the referendum, the currency depreciation following Brexit was “already undermining the attractiveness of the UK to live and work”.

This was also evident in a survey by the National Farmers Union published earlier this week. Almost half the companies providing agricultural labour said they were unable to fulfil the horticultural sector’s demand for workers between July and September. Warning of a “crisis” in the industry, the NFU said that the supply of seasonal workers appeared to be drying up even before the UK introduced new restrictions on EU migrants.
Mr Davies believed worse was to come:
– There is a strong likelihood that the recruitment and retention challenges of employers will be exacerbated further when EU migration restrictions are introduced, which will affect low-skilled employers especially. Employers need to urgently explore all recruitment channels and look at underutilised groups of the labour market, starting with young people and students, to offset the risk of looming labour shortages.
Other employer groups agreed. Kevin Green, chief executive of the Recruitment & Employment Confederation, said:
– In engineering and technology firms, on construction sites and in school and hospitals, there are more vacancies than there are the people to fill them.
The notion of a post-Brexit fall in immigration has been predicted by several economists including Jonathan Portes, principal research fellow at the National Institute of Economic and Social Research. A shakier economy, weaker pound and reports of a rise in hate crime are enough to discourage EU migrants who are able to find work elsewhere in Europe.
The effect of Brexit on net migration will not start to be seen until early next year, when the ONS releases figures that include the three months after the referendum. But even then, these data may prove less significant than they have been so far.
Madeleine Sumption, director of the Migration Observatory at the University of Oxford, said that net migration statistics had become “rather irrelevant” in the current migration debate.
– Brexit could mean a wholesale revision of UK migration policy, so current rules are little more than place holder policies, she said.
– Assuming it takes at least two years to leave the EU, we wouldn’t see any new policies towards EU citizens reflected in the statistics this side of a 2020 election.
Copyright The Financial Times Limited 2016