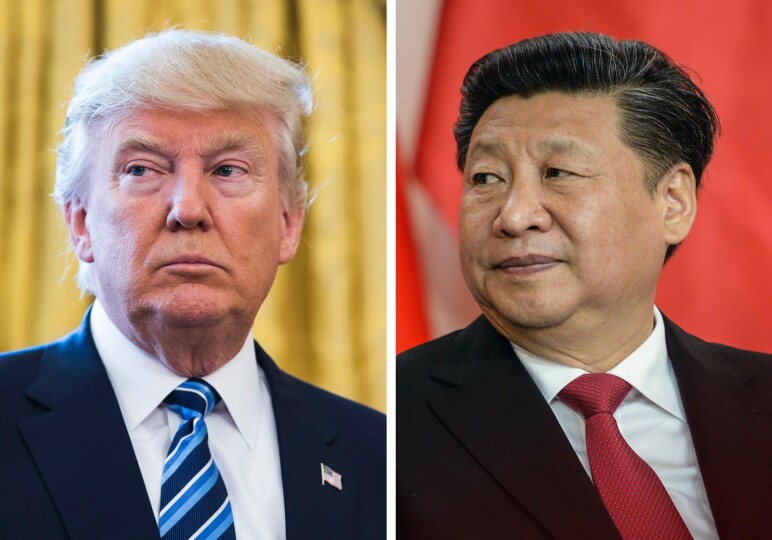 Financial Times / Demetri Sevastopulo
10.02.2017 11:02 UPPDATERAD 10.02.2017 17:41
In his first conversation with Mr Xi since entering the Oval Office, Mr Trump said the White House would honour the "One China" policy under which the US recognises Beijing - and not Taipei - as the seat of the Chinese government.
The White House confirmed that the leaders had spoken - as first reported by the Financial Times - and that Mr Trump had "agreed at the request of President Xi to honour our 'One China' policy". It added that the phone call was "extremely cordial".
The FT reported in December that Mr Trump had spoken to Tsai Ing-wen, the Taiwanese president, in what was the first conservation between a US president or president-elect and a Taiwanese leader since Washington and Beijing established diplomatic ties in 1979. China responded by accusing the US of interfering in its internal affairs.
The call with Mr Xi - on Thursday evening Washington time - came as Mr Trump was preparing to welcome Shinzo Abe, the Japanese prime minister, to the White House on Friday. The decision to speak to Mr Xi on the eve of the Trump-Abe summit was designed to reduce the fallout from the lavish welcome planned for the Japanese leader. Mr Abe will dine with Mr Trump four times, fly on Air Force One to the president's resort in Florida, and play a round of golf with his US counterpart.

"The significance of this phone call before the visit of Prime Minister Abe cannot be overstated," said Dennis Wilder, a former top China analyst at the CIA now at Georgetown University. "The Chinese had sought reassurance that President Trump did not intend to overturn a fundamental principle underpinning US-China relations and north-east Asian geostrategic stability for the past four decades - the One China policy."
Mr Wilder added that by reasserting the commitment to the policy, "President Trump opens the ground for a constructive dialogue with Beijing on the difficult but resolvable issues of rebalancing the trading relationship that has tilted in Beijing's favour".
Beijing will welcome the decision to back the One China policy after Mr Trump angered Chinese officials in December by suggesting after his call with Ms Tsai that he would only support the One China policy if Beijing agreed to do some kind of deal on trade with the US.
The call between the US and Chinese leaders came just hours after a White House meeting between Mr Trump and Rex Tillerson, secretary of state. Two people familiar with the thinking of Mr Tillerson, former ExxonMobil chief executive, said he wanted Mr Trump to back the One China policy.

"It's a wise move that sets the basis for Trump and Xi to address the myriad challenges on the US-China agenda. It signals to China that Trump is willing to learn," said Evan Medeiros, a former top Asia adviser to Barack Obama now at Eurasia Group. "Now the rest of Asia is asking: how will Trump deal with China on trade, the South China Sea and North Korea? Presidential conversations are the major muscle movement in this relationship and hold the greatest prospect for managing these tough issues."
Beijing has been concerned about Sino-US relations since Mr Trump started lambasting China during the presidential campaign. But Communist party officials were alarmed when Mr Trump went beyond the two powers' economic relationship by suggesting his administration would take a different stance on Taiwan.
In his confirmation hearing, Mr Tillerson also angered Beijing by suggesting that the US might try to block Chinese ships from accessing disputed islands being built up by Beijing in the South China Sea. But James Mattis, US defence secretary, appeared to ratchet down the rhetoric last week when he suggested the US military should not take any "dramatic" moves in the contested waters.

Paul Haenle, director of the Carnegie-Tsinghua centre in Beijing and the top China adviser to Presidents George W Bush and Barack Obama, welcomed the move by Mr Trump.
"This was the right step, not because it's what Beijing wanted but because upholding our One China policy is ultimately what is in the US's interests," he said. "The One China policy was the basis that allowed the US to establish relations with China four decades ago while maintaining robust unofficial relations with Taiwan."
Mr Haenle said that while Mr Trump had toyed with the notion of using the issue as a bargaining chip, he had concluded that "the One China policy is not a card on the bargaining table - it is the table itself".
Following the White House statement, CCTV, the Chinese state broadcaster, reported the phone call, saying Mr Trump had told Mr Xi that he understood the importance of the One China policy and would respect the diplomatic formulation.
Bonnie Glaser, a China expert at CSIS in Washington, said Mr Trump's statement "averts a major crisis in US-China relations that has been building quietly over the last several months".
She said Mr Trump had probably been persuaded that it was too risky to attempt to use the One China policy as a bargaining chip. "Xi Jinping had no room to manoeuvre on this issue. With this matter now resolved, the two countries can start to address the economic and other issues that are Trump's real priorities," she said.
Copyright The Financial Times Limited 2017